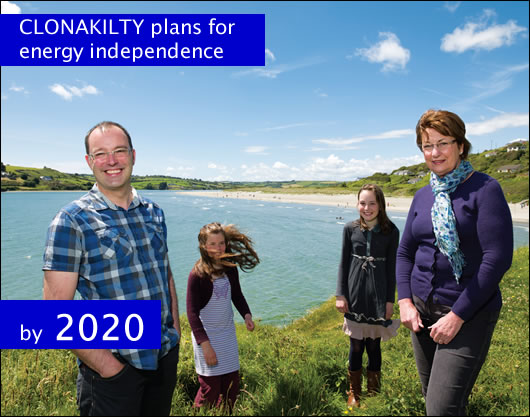 A group of activists in Clonakilty, west Cork want to convert the town’s energy supply to 100% renewables — and they want to do it in just nine years. The ambitious goal is outlined in a new study released by Sustainable Clonakilty, a local environmental group. If it comes to fruition, the plan — prepared by sustainable design consultants DW EcoCo — would see the town and its surrounding area powered and heated by a mix of biogas, energy crops, wind and solar power. The study found that the area boasts enough renewable energy resources to meet ten times its projected energy needs in 2020.

It’s no surprise Clonakilty is trying to lead the way in green energy – it’s long been a pioneer in environmental and ethical issues. In 2003, it became Ireland’s first Fair Trade town, with local resident Jennifer Sleeman a driving force behind the campaign. A few years later, she organised local screenings of The End of Suburbia, a documentary about peak oil. “Someone said to me we have to do more, which was wonderful, it was music to my ears,” says Jennifer, now 81.
Sustainable Clonakilty was born soon after — the group meets every month and holds regular talks on green issues. “We started off at the height of the Celtic Tiger. “People had so much money that conservation or sustainability wasn’t a word on most peoples’ agenda,” says Cionnaith O’Suilleabháin, a Sinn Féin member of Clonakilty town council and founding member of the group.

Find out more or adjust your settings.

This website uses cookies so that we can provide you with the best user experience possible. Cookie information is stored in your browser and performs functions such as recognising you when you return to our website and helping our team to understand which sections of the website you find most interesting and useful.

Strictly Necessary Cookie should be enabled at all times so that we can save your preferences for cookie settings.

If you disable this cookie, we will not be able to save your preferences. This means that every time you visit this website you will need to enable or disable cookies again.